I’m looking closely at the very peak of our uncommon word graph.

It comes right at the start of Chapter Five:

[05.012] Deep down here by the dark water lived old Gollum, a small slimy creature. I don’t know where he came from, nor who or what he was. …
[05.015] ‘Bless us and splash us, my precioussss! I guess it’s a choice feast; at least a tasty morsel it’d make us, gollum!’ And when he said gollum he made a horrible swallowing noise in his throat. That is how he got his name, though he always called himself ‘my precious’.

Is it a name?  Or a sound word?  In the current analysis, it’s counting as an uncommon word, a sound word.  I will be counting it as a sound word when we examine those separately, as it’s such an ingenious way of communicating the character’s dangerousness.  Of the 550 uncommon words in Chapter 5, “Gollum/gollum” accounts for only 100 of them.  The scene is terribly dense with uncommon words, thanks to Gollum’s manner of speaking.  May I give you a glimpse of my MarkWords file?

[05.048] After a while UNCOMMON began to UNCOMMON with pleasure to himself: ‘Is it nice, my UNCOMMON? Is it juicy? Is it UNCOMMON UNCOMMON?’ He began to peer at Bilbo out of the darkness.

[05.050] ‘It must make UNCOMMON, UNCOMMON!’ said UNCOMMON, beginning to climb out of his boat 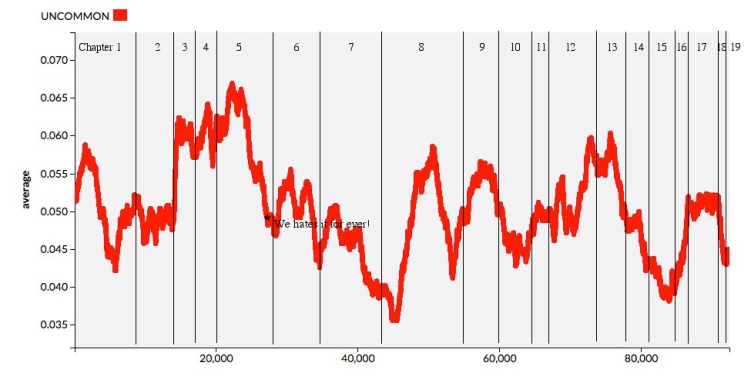 The sharp increase comes right at the beginning of Chapter 3, A Short Rest.  The end of the sudden decline, here:

To use recognizable landmarks, all these unusual words occur in Rivendell, among the goblins, and with Gollum.  We recall that unusual words are merely less-frequent, not high-register.  This sustained peak includes Gollum’s sibilant speech and the goblins’ “Clap! Snap! the black crack” poetry full of sound-play as well as the descriptions of Elrond’s sanctuary and his high speech and Thorin’s and Gandalf’s responses in kind.  Elves and goblins have their own languages and Gollum his own idiolect.  I believe that these unusual words twist our ears a little, knock us off of solid, prosy footing.  The slightly uncommon words are consistently so – enough to suggest the alien languages underlying these characters and places.

My goodness. The local dip in Chapter 1, around word 5700, is in fact one of the five or six lowest dips in the work.  And what do we find there?

Bilbo on his dignity.

This first local peak occurs in Chapter 1, and we must remember what it represents: the five thousand words surrounding this point contain a peak number of uncommon words.  Still it’s fun to see exactly what’s happening right at the peak:

So apt.  This little peak comes at

[01.017]: You will notice already that Mr. Baggins was not quite so prosy as he liked to believe, also that he was very fond of flowers.

You can see that this peak does not fall off immediately, the windows next to it contain “Far Over the Misty Mountains” at their edge.

I have used a window of five thousand words this time, which shows the trends much more smoothly.  Let’s break this down and read what it is telling us in the next few posts.  Remember our Words Per Chapter list as you look over the graph.  The great news is that since I use Lexos directly on their web site, I can hover over any individual red dot and get the exact word number at the center of that window.  Zipping over to my electronic copy of The Hobbit, I can find that word and report back.

Tech Support is going to try to teach me how to use image-manipulating software to make a layer of chapter break lines to superimpose on each of these graphs.  If he succeeds, I will owe Tech Support a very big batch of blueberry muffins.

“Unbeknown” is a beauty, all right, and of course lemmatizes to “know”, a prominent citizen of The Ten Thousand.  However, by itself it is uncommon in our definition!

This evening, we enjoy “shod”, the perfect and past participle of “to shoe“.  Of course “shoe” is a member of The Ten Thousand. I am pleased that we have the ability to keep this uncommon form of this lovely strong verb.  I have discovered a fondness for strong verbs (sing, sang, had sung; sink, sank, had sunk; buy, bought) and particularly for those which used to be strong in the Early years of Modern English, but which have succumbed to the pressure of language simplification.  I imagine these words (seethe, sod, had sodden; thrive, throve, had thriven) remembering their glorious days of strength and beauty and hoping that their sacrifice has served the cause of literacy.  I salute those which remain strong.